We are so proud to share that our “pandemic paper,” “Septins and a formin have distinct functions in anaphase chiral cortical rotation in the C. elegans zygote,” has been accepted for publication in Molecular Biology of the Cell, the journal of the American Society for Cell Biology.

Former Honors Thesis student Adhham Zaatri started as a work-study worker, then learned cell biology, and drove this project for much of his undergrad studies. After he graduated, he worked over the internet with postdoc Jenna Perry to finalize and submit the manuscript. Once regaining access to the lab, and while juggling several other projects, Jenna earned co-first-authorship by completing several referee-suggested experiments that truly advanced our thinking on the topic and strengthened the story.

The science, you ask? We studied the cortical dynamics of the C. elegans zygote in cytokinesis, and noticed that in addition to contractile ring formation and constriction, the cortex also flows around the circumference of the cell, with consistent handedness (see curl of fingers in schematic). When we started this work over a decade ago, we knew that the handedness of the rotation was the opposite of that observed by colleagues in Germany. By imaging a printed letter “F” on our microscope, Jenna determined that Olympus and Nikon scopes display objects with mirrored handedness, with respect to the naked eye. (Zeiss and Leica scopes preserve real-world chirality.)

For our paper, we used particle image velocimetry to quantify rotation, and then report that septins are required for rotation. Thinking that this may be due to an effect on F-actin filaments generated by the formin CYK-1, we explored its localization and found that it is enriched in the zygote posterior in a septin-dependent manner. This suggested that this pole of the cell is analogous to the dorsal side of cultured mammalian cells, which the Bershadsky group showed tilt their initially-radial F-actin bundles. We went on to show that CYK-1 is not required for cortical rotation, but is essential for the direction and persistence of rotation. We conclude that anaphase cortical rotation results when chiral torsional stress accumulated in the cortical network via actin polymerization from membrane-anchored formins is relieved by cytokinetic ring contractility. The septins could play one or more roles in network connectivity (see green hypotheses in schematic). 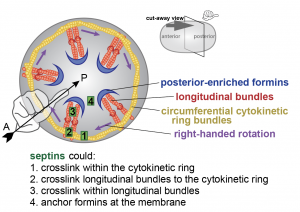